An international team using the Very Large Telescope in Chile has managed to accomplish an impressive feat: detecting an exoplanet about 40% of Earth’s mass in a star 35 light-years away. It was the first time that such a modest-sized world had been probed using the radial velocity technique, which measures distortions in the star’s light signature as planets revolve around it and make it wobble, due to gravitational interaction.

The feat was only possible thanks to the Espresso, a spectrograph installed in 2018 on the VLT that has much greater precision than its predecessors. The results of the group led by Olivier Demangeon, from the University of Porto, in Portugal, were accepted for publication in the journal Astronomy & Astrophysics and indicate the presence of at least four planets, possibly five, around the star L 98-59. Three of them were previously known, having been discovered by the Tess satellite in 2019.

NASA’s exoplanet-hunting spacecraft detects them using the transit method, measuring the star’s dimming as they pass in front of it. This allows us to estimate the diameter of these worlds, but not the mass. The radial velocity technique, in turn, provides the mass but not the diameter. Hence the motivation for the new study. 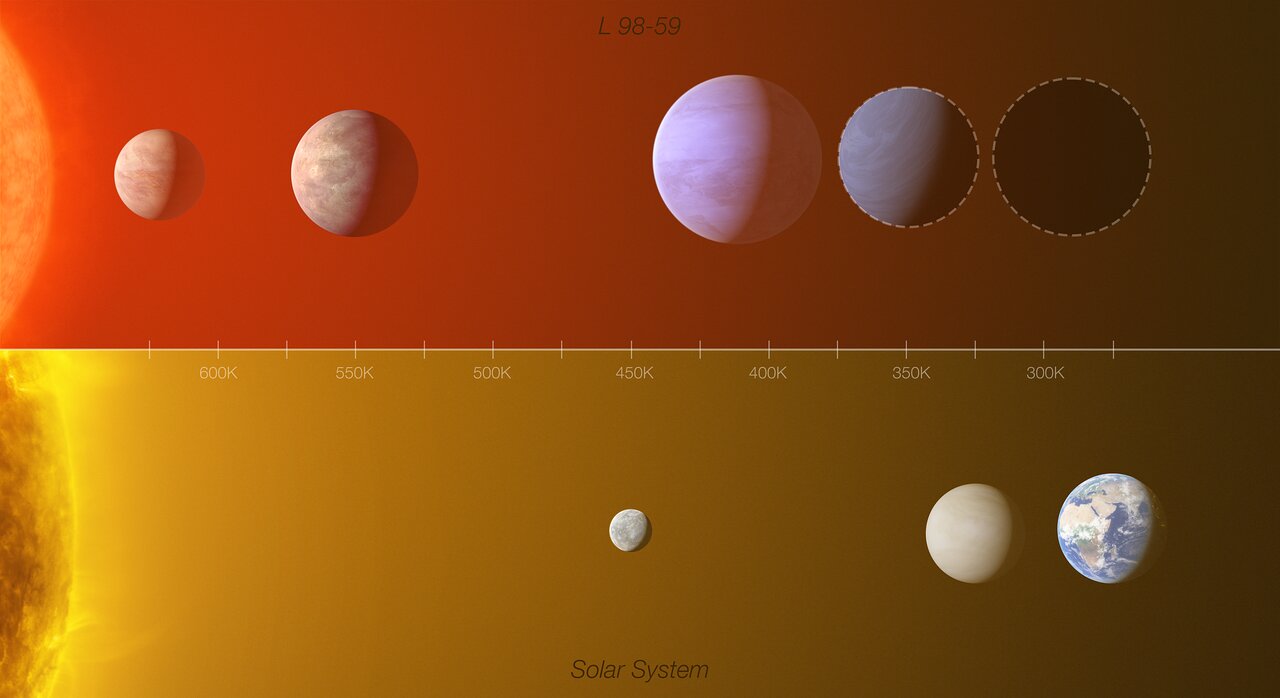 Comparison between the equilibrium temperature, in Kelvin, of Mercury, Venus and Earth and that of the planets of the L 98-59 system. The fourth planet, d, is dotted because the diameter is unknown, and the fifth is yet to be confirmed. (Credit: ESO)

Planets b, c and d have very short periods, completing a circle around their star every 2.2, 3.7, and 7.45 Earth days, respectively. This close, they are certainly uninhabitable, even taking into account the fact that L 98-59 is a red dwarf star, smaller and cooler than the Sun. Still, they arouse interest. And the combination of mass and diameter data makes it possible to estimate its density and thus project the possible composition.

The inner two, of which the smallest is the first, are rocky and dry. The third of them, d, seems to be a planet that has 30% of its mass in water, which would make it an ocean-world. Despite this, the temperature probably makes it uninhabitable.

In addition, the radial velocity data indicated the presence of a fourth planet, which Tess had not identified, with a mass at least three times that of Earth and a period of 12.8 days. There are also signs of a fifth planet, this one not yet confirmed, with a period of 23 days. If it does exist, it must be right in the middle of the system’s so-called habitable zone, where the distance to the star would allow for the presence of liquid water stably on the surface.

In addition to breaking sensitivity records in detecting planets by radial velocity, the finding is important for the future of research on these objects. The L 98-59 system is close enough to allow the James Webb Space Telescope, to be launched later this year, to attempt to probe the atmospheric composition of its planets.

This column is published on Mondays in Folha Corrida.