The pair of researchers who hypothesize that there is a ninth planet in the Solar System, well beyond Neptune, have just released a new study they describe as a “treasure map”: a prediction that would indicate where in the sky most likely , must be the supposed object.

The idea of ​​the so-called Planet Nine was first presented by Mike Brown and Konstantin Batygin in 2016. In the fashion of the discovery of Neptune, which had its existence mathematically predicted after observing certain unexpected deviations in Uranus’ orbit, the Caltech duo ( California Institute of Technology) evoked the need for a massive ninth planet, in a very eccentric (flat) orbit away from the Sun, to explain a certain pattern of distribution in the trajectories of several KBOs, English acronym for Kuiper Belt Objects (region that houses the dwarf planets Pluto and Eris, among other smaller objects, remnants of the formation of the Solar System).

The difference between the two cases is that astronomers John Couch Adams and Urbain Le Verrier closed the calculations for the discovery of Neptune in 1846, and the planet was found by Johann Galle, from the Berlin Observatory, on September 23 of that year. Planet Nine is still not found.

There is debate in the astronomical community whether the clustering of KBOs that would indicate the existence of such a planet is real or is the result of an observational bias (scans discovering objects preferentially because of where they are looking). In the new article, accepted for publication in the Astronomical Journal, Brown and Batygin reaffirm that there is not enough bias to explain the patterns and refine what would be the basic parameters of the hypothetical star. 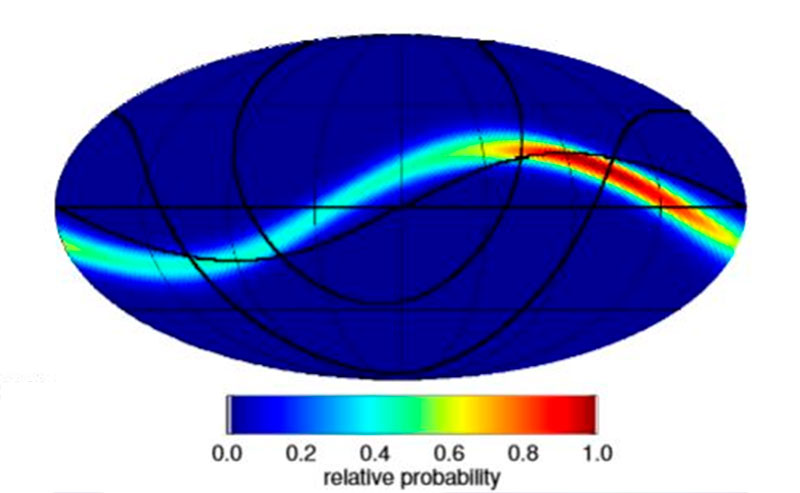 Combining simulations and probabilistic analyses, they say that Planet Nine is around 6.2 times the Earth’s mass, has an average distance from the Sun of 380 astronomical units (that is, it is 380 times farther from the Sun than Earth) and it has perihelion (closest point to the Sun) at 300 AU. The aphelion (farthest point) would be at about 500 AU.

Since no one has found it yet, the assumption is that it is close to aphelion, when it would be less brilliant. According to the pair, the planet must be in a strip of sky close to the plane of the Milky Way. It is there that the two conduct their search, with the Subaru observatory in Hawaii. Until now, nothing. But the new study indicates that the planet would be within reach of several sweeping projects across the entire sky, including the one that will be conducted by the Vera Rubin Observatory, a new facility in Chile that should start operating between 2022 and 2023.

“I think of the picture [com a carta celeste de probabilidade de presença do astro] like the Planet Nine treasure map,” says Mike Brown. “Time to start the hunt, my fellow pirates”, he concludes in a good-humored tone.

This column is published on Mondays in Folha Corrida.